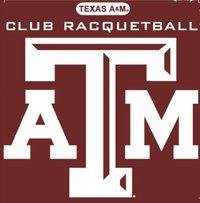 Singles will be played Saturday and doubles on Sunday!

This tournament is a fundraiser to help raise money for the Texas A&M Racquetball Team!

There are many different divisions for both men and women’s singles and doubles as well as mixed doubles. (Divisions will only be played if enough participants are available for each division.)

We will be offering prize money for Men’s Open Singles and Doubles as well as Women’s Open Singles. *However, the divisions must meet the minimum player number requirements for prizes to be paid out.*

The tournament format will be single elimination with consolation.

Play will start Saturday at 8am and Sunday at 9am.

Divisions that are not large enough for a single elimination draw will be turned into a round robin or pool play format.

Official Texas A&M medals awarded to 1st and 2nd place in all divisions.

Official Texas A&M Racquetball Club gear will be available at the tournament desk while supplies last.