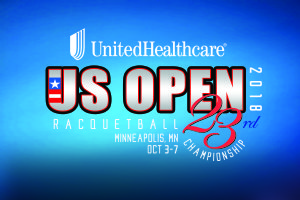 USA Racquetball‘s US Open, currently the UnitedHealthcare US Open, has been held once a year for the last 23 years. Originally held in Memphis, Tennessee, it has been held in Minneapolis, Minnesota since 2010.

During the 2017-2018 season, Kane was sidelined by injury for a number of tournaments taking him from his usual top ranking to the third ranked player for the seeding of this event.

You can find additional commentary on Kane’s accomplishments here:
https://theracquetballblog.blogspot.com/2018/10/waselenchuk-wins-14-at-2018.html
and
http://blog.proracquetballstats.com/index.php/2018/10/08/us-open-mens-pro-singles-final-and-event-wrap-up/

Round of 16
vs Javier Mar

During the same tournament, he also played pro doubles with Ben Croft, and they made the finals.

Post match with @kingkanerb after his 14th US OPEN Championship. The G.O.A.T.

Posted by UnitedHealthcare US OPEN Racquetball Championships on Sunday, October 7, 2018

Come chat with Kane after his 14th US OPEN.

Discussion after early round win

We have Kane Waselenchuk for 10 minutes, come ask the G.O.A.T. a question after his round of 32 win. #racquetball International Racquetball Tour

Didn’t see enough of Kane’s play in these matches? There are 153 more YouTube videos of Kane collected in this playlist: